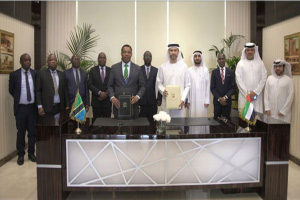 Tanzania and Qatar have signed a MoU to end double taxation and strengthen trade and investment ties with the United Arab Emirates (UAE).

A media statement issued by the State House says the objective of the MoU is to 'enhance trade and investment cooperation and partnership between business communities from Tanzania and Qatar.'

To strengthen trade and investment among the countries, the statement specifies several areas of priority, including tourism, hospitality, infrastructure and energy.

To witness the signing event, Tanzania president Samia Suluhu Hassan was present along with other high-ranking officials from Tanzania Mainland, the island of Zanzibar and the authorities from the chambers of Commerce of Qatar.

President Samia also met with Qatar's Finance Minister, Ali bin Ahmed Al Kuwari. According to the State House document, the two leaders discussed the lingering matter of double taxation for goods exported and imported between the 2 countries, among other topics, all meant to help strengthen trade and investment.

Tanzania President Samia also held talks with Qatar's Public Health Minister, Dr. Hanan Mohamed Al Kuwari, on how they can share expertise in emergency and trauma cases. She also met the Emir of Qatar, Sheikh Tamim bin Hamad Al Thani. She attended the World Innovation Summit for Health (WISH) at the Multaqa Education Centre in Doha where healthcare was discussed in view of global economic growth.