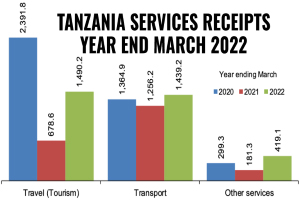 The Bank of Tanzania Monthly Economic Review-April 2022 reveals that the countryâ€™s exports of goods and services increased to US$ 10,214.6 million during the year ending March 2022.

Improvement in exports was noted in both traditional and non-traditional exports in addition to travel receipts.

A significant portion of the increase in exports is attributed to tobacco, cosmetics, cement, plastic items, horticultural products and cereals, particularly, rice and maize.

On a monthly basis, traditional exports rose to US$ 32.8 million from US$ 22.4 million in March 2021, thanks to an increase in the export values of coffee, cotton, cloves, and tobacco.

The significant increase in the value of cloves exports is explained by stockpiling of cloves that occurred when clove prices were lower.