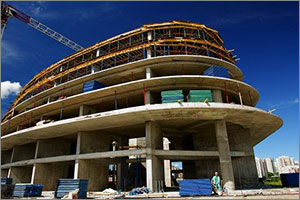 Nairobi - Kenya's construction sector is expected to recover this year on the back of the government's continued implementation of investor-friendly reforms as well as large-scale infrastructure projects aimed at boosting regional integration and economic diversification.

This is according to a report by Deloitte which reveals that the sector's growth is expected to revamp to a growth of 6.3 percent this year.

The sector contributed about 6 percent to Kenya's GDP and supported more than 221, 000 jobs annually in both the public and private sector on average over the past five years.

During the period, the sector also experienced a year-on-year growth of 7.8 percent on average but is estimated to have slowed down to 1.3 percent real growth in 2020 as the COVID-19 pandemic ravaged through the sector's activity.

"2021 brings with it new hope of recovery in the sector as the Kenyan government continues to remain committed in implementing investor-friendly reforms and driving large-scale infrastructure projects aimed at boosting regional integration and economic diversification," the report states.

It however warns that efforts to reign in expenditure, as well as growing scrutiny of the financial sustainability of Chinese-funded infrastructure projects by (largely by the Kenyan Government) and Chinese lenders to curb Chinese infrastructure will weigh on the construction industry's medium-term recovery.

Additionally, the need for fiscal consolidation given high levels of debt is expected to constrain public infrastructure investment in the medium term and slow down the construction industry 's growth.