Kenya to complete upgrade of roads by December 2021 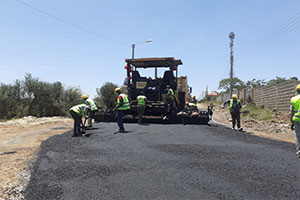 James Macharia, Transport Cabinet Secretary has assured that the government will complete the construction of 408 kilometres of tarmac roads in Nairobi's informal and thickly population settlements by December 2021.

Macharia who spoke after reviewing the construction of the new tarmac roads in Nairobi's informal slums said the project is now 40% complete with 104 kilometres fully tarmacked and will be entirely completed by December 2021.

Macharia also stated that the government is undertaking the project in order to progress accessibility and service delivery and to offer employment opportunities to local youth.

Road works which is being carried out by the Kenya Urban Roads Authority (Kura) involves the advancement of the roads to bitumen standards under the informal settlements program.

"I have consulted with Major Badi on the status of these roads and have decided on how they can be reformed to standard roads that residents can walk on without getting muddy during the rainy season," Uhuru stated then.

This project was launched in November last year but contractors initiated the works in January 2021.