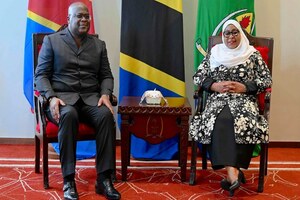 President Samia Suluhu Hassan and her Democratic Republic of the Congo (DRC) counterpart, FÃ©lix Tshisekedi, have agreed to collaborate in a number of areas to boost bilateral trade.

Tanzania and the DRC intend to collaborate in a variety of areas, including trade, investment, infrastructure, finance, energy, education, defence, security, and immigration.

This decision was reached following discussions between the two leaders at the State House in Dar es Salaam.

During their talks, the two leaders reaffirmed their shared commitment to fostering a spirit of solidarity and brotherhood between the two countries and their people.

In terms of trade, she stated that following her visit to the DRC in August 2022, both countries' Foreign Ministers were instructed to convene an emergency meeting of the Joint  Commission was not met for nearly two decades.

"I am pleased to report that the commission met in September of this year and adopted 50 resolutions, as well as signing a Memorandum of Understanding," on defence and security, infrastructure and transportation, trade and investment, relations and social cooperation between Tanzania and the DRC," President Samia said.

The Finance Ministers of Tanzania and the DRC met in the United States with the International Monetary Fund (IMF) and the World Bank and decided to apply for a joint loan to complete construction of a Standard Gauge Railway from Kigoma to the DRC via Burundi. As a result, President Samia stated that the two countries have started to take steps in terms of infrastructure and transportation.

She stated that during her recent visit to Kigoma Region, she visited the Tibirizi Port, where two ports are being built to connect with the ports of Kalemie and Moba town in the Democratic Republic of the Congo.

According to President Samia, Tanzania is remodelling the MV Sangara ship and constructing a brand-new ship that will sail on Lake Tanganyika and make it simple for businesspeople from both nations to connect in order to advance trade.

Construction is underway on the Northern Corridor, which will link Tanzania and the Democratic Republic of the Congo by way of the East African Community. The goal is to increase trade between these countries"She made a remark.

President Samia stated that they have also agreed to make full use of the 2022 UN climate conference (COP27) in Egypt, which Tanzania will lead and will be supported by other countries such as the DRC and the EAC.

She also stated that the countries have agreed to remove tax and non-tax barriers to promote trade and has directed trade ministers to work on the issue.

President Tshisekedi, for his part, stated that they had focused more on security issues during their discussion because it is difficult to believe that all of the projects they had planned would be feasible without security and peace.

"In the DRC, security is very important, and as president, I have focused on developing brotherly relations with our neighbours," he said.

He emphasised the importance of African countries developing sound business plans and making effective use of resources to build their economies rather than relying on Western aid.

"We have also reached an agreement on road, rail, and communication infrastructure. It is critical for our two countries to develop this sector of communication "He stated.

He stated that the communication sector is important because it generates not only income but also jobs.

"We said at the COP27 meeting that we will talk as SADC about how to deal with the challenges we face, including climate change," he explained.