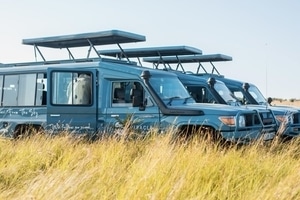 E-Motion Africa was founded in 2019 with the goal of delivering an unique and easy solution to Tanzania's decarbonization dilemma by converting the diesel engine of safari vehicles into an electric motor driven by solar energy.

"There is no gas emitted. It is truly a vehicle for the future," the minister stated.

According to him, the formation of E-Motion Africa is the outcome of a collaboration between four organisations with experience in their respective fields (Hanspaul Group, a manufacturer of safari cars, Gadgetronix, a builder of solar farms, Akuo, and Carwatt).

"We are dedicated to increasing collaboration and technology exchange with Tanzania," Mr Riester added.

Mount Kilimanjaro Safari Club (MKSC), a French safari firm that has been operating in national parks in Tanzania for the past twenty years, spearheaded the idea.

"The goal is to give vehicles a second life and to utilise Renault recharging batteries (which are no longer suited for European cars) a second life, as well as to equip all safari vehicles," Mr Riester explained.

This, in turn, he noted, would allow for a more quiet movement that is more courteous of the wildlife in the parks, which is doubly respectful of the environment.

According to MKSC managing director George Ole Meing'arrai, the project will have considerable economic, social, and environmental advantages that might be applied to other types of mobility (buses, taxis, safari cars and private vehicles).

He claims that if the e-car battery is completely charged, it can go between 130 and 150 kilometres. He claims that depending on the type of battery, it may be charged in three to twelve hours.

He stated that at the moment, the battery could be charged using household energy.

Mr Meing'arrai, on the other hand, stated that if demand increased in the future, they would consider opening many filling stations around the country.

According to official estimates, roughly 1.4 million batteries will need to be recycled by 2030.

Tanzania's tourism appeal will be significantly increased by E-Motion Africa, since it will be the first country in Africa to deploy electric automobiles on all of its safaris, according to a portion of the statement.

Tanzania's tourism appeal will be significantly increased by E-Motion Africa, since it will be the first country in Africa to deploy electric automobiles on all of its safaris, according to a portion of the statement.