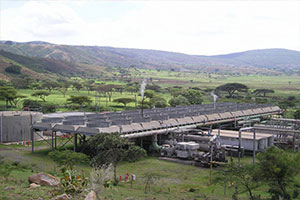 Chinese equipment and oil services company Kerui Petroleum stated that it has successfully lifted the derrick and substructure for the first 1500HP drilling rig at Ethiopia's Aluto-Langano Geothermal Energy Project.

The accomplishment of the first rigging up marks a landmark in the 70-MW geothermal energy project, which is part of Ethiopian government's plans to enlarge geothermal energy generation in the upcoming few years, the Chinese firm mentioned in a statement.

Under the contract, Kerui Petroleum will supply two sets of 1500HP drilling rigs, personnel training, drilling operation and related technology transfer for the drilling initially of the 22 wells at Aluto-Langano.

The Aluto-Langano geothermal exploration project first work began in 1981. The site already has a geothermal power plant that began its operation in 1998 with a production capacity of 7.3 MW. The facility, however, has been closed since 2018 owing to technical problems.

Ethiopia, occupying the longest section of the 7,000-km great East African Rift Valley boasts an estimated geothermal potential of 10,000 MW, envisaged to tap into the potential of the geothermal energy to power the country's development projects.

The energy sector is one of Ethiopia's priorities as the country envisages becoming a light manufacturing hub in Africa and middle-income economy by 2025.