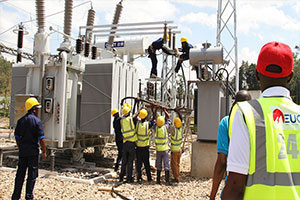 Rwanda's quest to avail affordable energy to the population got a boost this week following, the approval by the World Bank Group of $150m (approximately Rwf142bn) to finance energy access for households, enterprises and public institutions in Rwanda.

Half of the apportioned funds will be disbursed in form of grant while the other half will be given on credit, according to a statement.

The funding permitted by the World Bank Board of Directors is intended at building on energy sector gains.

This funding is part of the Rwanda Energy Access and Quality Improvement Project which is custom-made to advance Rwanda's progress in the direction of achieving UN Sustainable Development Goal 7 (SDG7) to guarantee access to reasonably priced, reliable, sustainable and modern energy for all.This initiative also targets at decreasing reliance on cooking fuel by 50%.

Rolande Pryce, the World Bank Country Manager said that the funds seek to support the country's goals of universal energy access by 2024 as well as universal access to clean cooking by 2030.

She further stated, "The proposed project is well timed to build on the World Bank's decade long support to the Government's energy sector agenda. It will fund directly to Rwanda's drive toward universal energy access by 2024 and universal access to clean cooking by 2030".

The funds will go into ongoing programmes of increasing grid connections for residential, commercial, industrial, and public sector consumers, along with providing grants to decrease the costs of off-grid solar home systems.

The project will also boost the availability and effectiveness of low-cost renewable energy by returning capacity at the Ntaruka Hydro-Power Project, reducing voltage fluctuations on transmission lines, and backup the national smart meter program.

From the funding, there will the implementation of the World Bank's largest clean cooking operation in Africa, and the first project co-financed by the recently launched Clean Cooking Fund (CCF).

The CCF will provide $20 million for clean cooking, with $10 million provided as a grant and $10million extended as a loan.

The project targets 2.15 million people, leveraging an additional US$30 million in public and private sector investments.

By incentivizing the private sector and improving the enabling environment, World Bank officials say they aim at developing a sustainable market for affordable clean cooking solutions in Rwanda.