Rwandas Electrification a Must- REG Chief 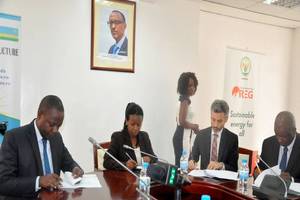 According to new determined targets set by the Rwanda Energy Group (REG), productive users like community production centers will be able to relish uninterrupted power supply in five years.

These targets are part of the commitments in the recently-signed performance contracts by REG and its subsidiary companies. By the end of 2018, the performance contracts state that the targets and strategies to reach government energy targets.
By the end of next year the government targets at least 563MW installed power generation capacity. Eng Ron Weiss, the REG chief executive, said all Rwandan households will have power by 2024.
“We have set our targets, but we will have to stretch them in the future,” he noted.
“We want to connect all citizens of Rwanda in the coming seven years and all productive users in five years. In two years we are preparing a plan to connect all Kigali residents,” Weiss indicated in a tweet earlier.
As part of the contract with REG, Energy Development Corporation Limited (EDCL) plans to increase access to grid and off-grid electricity, boost power generation capacity, as well as expand and strengthen the transmission network, among others. These goals are conducive towards the realization of the country’s development objectives.
EDCL also committed to increase the access to electricity from 35.6 per cent to 45 per cent by June 2018. This will connect 115,978 households on the national electricity grid, while 118,772 others will access off-grid energy solutions.
The second Economic Development and Poverty Reduction Strategy (EDPRS II) and the rural electrification policy emphasize access to electricity by productive users as part of efforts to support socio-economic development across the country.
Currently, the country’s total installed power capacity is around 190MW, an increase from 186MW in 2015.
There are many projects in the pipeline which when completed will greatly improve the country’s generation capacity. To name a few, the Hakan Peat to Power project that is expected to produce 80MW, the 80MW Rusumo hydropower plant, the 50MW Symbion methane gas power plant on Lake Kivu, exploration of geothermal resources and construction of eight small hydro power schemes, among others.