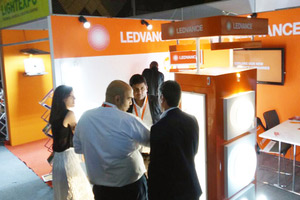 LEDvance, is a cutting edge company and currently the sole provider of voice-dimmable filament LED lamps that work with Apple products. The concept is now available in Europe, after having first launch t in North America.

Being a Germany based company, LEDvance is marketing the bulbs in Europe under the Osram name while using the Sylvania label in North America. It's presence in Africa is still to mature so LEDvance uses business platforms like the Lightexpo Africa which allows it to create strong inroads into the markets and position itself to cater to this tough economy.
The technology allows users to command Apple’s Siri voice system to turn the filament lights on, off, brighten, and dim. While Apple's Siri can brighten and dim other brands of standard-style LED bulbs, LEDvance claims that no other vendor makes a Siri-dimmable filament LED lamp. Filament LEDs are generally considered more decorative than it's cousins. They mimic a retro incandescent look. Users can also use an app if they don’t wish to speak to their bulbs.
For Africa whether there is even a market for such a technology is another matter. LEDvance would not share North American sales figures publicly. But in the slowly-evolving world of smart home lighting, the voice-dimmable filament is a product that could help enthusiasts stay one step ahead of the pack. A spokesperson for the company said the bulbs “have been very popular,” without getting specific figures.
For the EU market, LEDvance offers three bulb shapes which are branded as Classic, Globe, and Edison. All three use an E27 screw-in base (similar to an E26 in the US, but with an extra millimeter of diameter). Users can speak Siri commands to their standard Apple HomeKit hardware, which communicates with the lights via Bluetooth wireless technology.
LEDvance declienedt reveal pricing however the German Amazon website lists the filament bulb for €43.99, while other Amazon sites in the EU range up to €59. Similar listing for $34.99 is available on the US Amazon website which works out $3.00 more than the $31.99 that LEDvance announced in the US when it introduced the product, a month or two before making it available.
The three bulb models join LEDvance’s Smart+ line of smart home lighting products and mark an extension of LEDvance’s Apple HomeKit range. LEDvance began offering Siri-controlled Apple products last year, including standard LED bulbs and indoor LED strip lights.
The company has been offering the new products in Africa recently. It also plans to offer an outdoor Apple-compatible LED strip light in Europe, which my make its way soon to the East African region.
LEDvance also added to it's line-up two outdoor lighting products which can be controlled by voice via the ZigBee technology in Amazon’s Echo system.
LEDvance purchased the bulb operations of Osram in July 2016 and uses the branding platform to promote smart lighting technology globally.