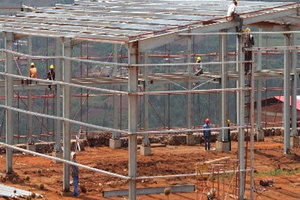 The construction industry contributes more than seven per cent to Rwanda’s national GDP. Big projects for example, the Bugesera airport project, have kicked off well while many others are in the pipeline.  There is still demand for retail space while more projects are coming up. Although the demand and supply sides are yet to be reconciled, the increasing capital spending by the private sector and government has thrust the sector into a position of driving economic development. According to RDB, construction spending in 2015 was $546 million, growing at 10 per cent, while real estate spending was $471 million, growing at 7 per cent Private and public works were growing at 9.4 per cent starting 2014. “The outlook for 2019 is good. Some actors are playing their roles well. How prepared we are to position ourselves to take up the opportunities is what will make the difference,” said Charles Lwanga, the Managing Director of NPD.

The free entry and exit nature of the sector has enabled many foreign firms to enter the construction market. Firms from India, China, Turkey and other countries are winning big tenders, a dynamic which has had an impact on local players, and driven the sector gains. A point to note is that it was a Turkish firm won a tender to build the Kigali Convention Centre, while Chinese and European firms are behind many big projects.

Although the outlook seems positive, there are some gaps to be plugged. For instance, much as space supply side seems to be growing, the demand seems to be an issue. Many of the developers acquired expensive loans to construct but factors like oversupply of space and low occupancy, especially in the CBD has raised fears that they might fail to repay the loans. Over 30,000 square meters of space is yet to be occupied in various city buildings. As supply for rental space tops demand Kigali developers panic.

The City of Kigali recently gave an ultimatum to all businesses and organizations working in residential houses to relocate into commercial and office complexes built in the city by March or they will be evicted, a move that has been largely seen to be intended to protect developers. As real-estate players want offices in Kigali residential areas closed.

According to John Karamagye, an engineer and construction expert, the boom has been driven by political will and improvements in self regulation. “Ease of doing business is not just rhetoric; it has made it easy for investors to kick start construction projects in the country,” he noted. The cost of construction materials is high partly because most of them are imported, this has also driven up costs; however this is also slowly changing, as some materials are starting to be made locally. For example, Cimerwa has stepped up its production, metal roofing sheets, hollow sections and profiles, clay and ceramic building materials (bricks, blocks and tiles), rebar’s and paint.

Although government has covered some ground in road construction especially in the city, there are still a number of roads both urban and rural that need investment.