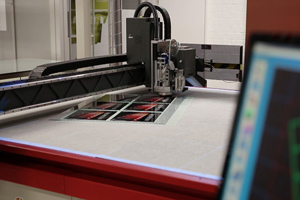 Afga Middle East has always had its eyes on the lucrative African printing market and it recently installed three printers for two of its Congo-based customers - XL Media Group and Congo Graphics.

John went on to explain that, 'Jeti Ceres is a roll-to-roll, 3.2 m six-color + white and/or first UV LED printer. It went out three years ago from our Canada plant and now has a powerful installation base around the globe. Acorta 3120 HS, an automatic self-recognition cutting plotter, was introduced during SGI 2015 in Dubai.'

John believes 'The African market offers access to enormous company possibilities and Agfa has tried to build as many local partnerships as possible in the hope of better outcomes and reduced risks. Our Anapurna range of printers is also quite popular in the region besides the Jeti designs. We have installed about 40 Anapurna printers in Africa by 2018 and expect to have some 5 to 7 units this year.'